Under Options | Remote Scripting .. or Remote PowerShell would you add a second check box. This second check box would add the script to "Open Device..." fly-out menu" like the Options | Program Options | Applications {tab} (Doesn't have to add it here, just making is an option on the "Open Device..." fly-out menu" ) . This way you can right mouse click to run the script. The check boxes could be both on or both off or toggled however needed.

My thoughts are: I would like to add "Get-WUInstall -AcceptAll -AutoReboot" via the Remote PowerShell but I don't want it to run against all machines my scans (this will force all windows updates and then reboot). I would like to uncheck the box for the active during scan but have another box that would allow it to be selected from the Right Mouse Click "Open Device..."

I know I can use the Options | Program Options | Applications {tab} and program my own script or set of commands to do this, just thinking since the software has the PowerShell and scripting built in it would allow you to add it to the "Open Device..." fly-out menu.

Thanks -WS
Reply Quote
We thought about that, but then decided not to do it because:

1) For PowerShell, it simply launches powershell.exe and feeds in the script. There is really no integration and doing something like powershell.exe -File myscript.ps1 in the Applications tab is the exact equivalent.

Alternatively you could generate a batch file Actions - Create Batch File as shown below and execute it separately. This way you will have a complete log of succeeded and failed commands: 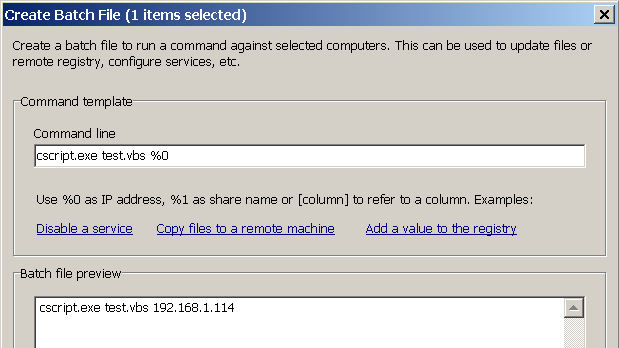 Reply Quote
Thanks for the explanation. Great thoughts and I am in agreement. -WS
Reply Quote