Image header is corrupted or not accessible (error C0000098)

Looking inside the newer corrupt version with a hex-editor, I see that both the header and the end of the file are quite different from the working backup.

Can someone at SoftPerfect tell me what to cut out or correct of the larger corrupted file-volume, so that I can perhaps get the most recent version mountable again?

I already tried a few things using HxD64.exe, copy pasting header from the functional backup, cutting out the end to match size etc. but to no avail thus far.
It would open and mount, but then SoftPerfect RAM Disk would ask me to format it before showing me a drive-letter. That's the best I got thus far.

Please shed some light as to where inside the file volume the added rubbish has appeared and can possibly be edited out. I'd very much like to get that newer file uncorrupted again.

Try a third-party disk mount utility that supports entering an offset, like OSFMount v2 (see under Downloads/Previous version). You need to enter the offset of 4096 bytes as shown below to the data when mounting the image file. An image file is essentially a 4K header followed by raw disk data.

By the way, do you have CCleaner installed by any chance? We have seen a set of image corruption cases linked to CCleaner software. 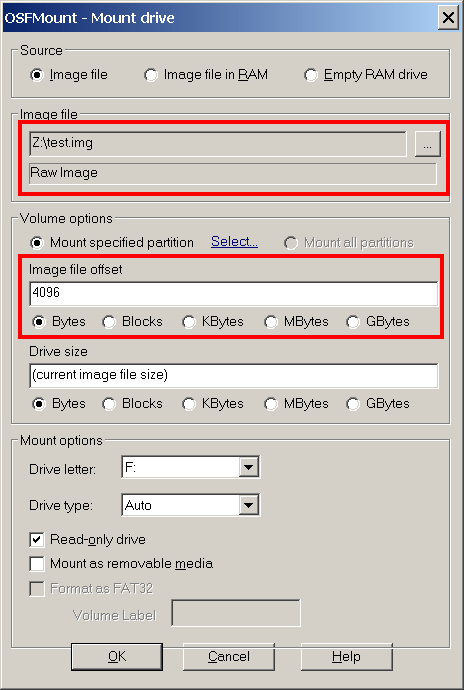 Reply Quote
Thanks for the pointers, with that and some fiddling with a hex-editor I got some, not all, lost files back simply by treating it as a broken/deleted HDD using testdisk.

Through that I also found out it had been damaged by CoveCube's StableBit DrivePool software, which had overwritten parts of the file system of the RAM disk .img volume. I guess they are using a RAM-based FS for caching purposes etc, and it got messed up somewhere.

It's my own fault too, since I've set StableBit DrivePool to bypass file system filters, which is probably a risky endeavor in conjunction with RAM disk. Although I must say it has been working flawlessly in unison for years now (aside from the Drivepool virtual volume not being able to hold the RAM disk image, for some reason that made the RAM disk occasionally unwritable)
Reply Quote
Loading an image creates error code C0000098:

How to handle that?
Reply Quote
That error is most likely what it says: the image is corrupted. Try creating and mounting a new blank image to see if it works.

Occasionally, image files can get damaged. We have been unable to determine the exact cause as it seems to be random, though the usual suspects are antivirus/security products and system cleaners (like CCleaner - it's a known combination that causes the corruption).

To recover data from the existing image you can try a third-party disk mount utility that supports entering an offset, like OSFMount suggested earlier, in which you need to enter the offset of 4096 bytes to the data when mounting the image file. An image file is essentially a 4K header followed by raw disk data. If OSFMount cannot mount the image at the 4096 bytes offset, I am afraid the file system and data may be damaged beyond repair.

We recommend backing up image files frequently to avoid data loss. Data corruption can be caused by a number of reasons other than the above, e.g. an unexpected system crash or power loss, so it's better to be prepared.

It is also important to bear in mind that RAM Disk, by its nature, intended for short-lived, volatile data. Even though Image files add the ability to keep disk contents over reboot/shut-down, it is an auxiliary feature and should not be used for storing vitally important data that is not backed up elsewhere.