I've used NetWorx with UPnP with my previous main gateway router, a Netgear WNDR3800, with no problems over the last 5 years or more. This was reconfigured as an Access Point as I was given a Netgear Nighthawk N7000 that I've now set up as my main router with UPnP enabled. However, despite the "Monitor my router rather than my computer" link showing the UPnP Gateway selection as "R7000 (Gateway)" with WAN Interface "WANCommonIFC1" selected OK, there is Nil traffic showing despite a clean reboot with this setup as well. Any ideas what might be blocking this monitoring traffic? My next step is to get WireShark monitoring the traffic to see if the firewall on my computer is responsible. However this firewall has not changed since NetWorx was monitoring the previous Gateway.
Reply Quote
Most likely it's a bug in the router's UPnP implementation. The monitoring is implemented by polling GetTotalBytesReceived and GetTotalBytesSent available in WANCommonInterfaceConfig.

We are aware of two common bugs in routers:

From your description it sounds like the second bug where the download counters simply stop going up. You can use Wireshark or a tool like SmartSniff to see what values come from the router. The responses are XML and human-readable as shown in the picture below.

Alternatively, if the Netgear R7000 supports SNMP, I would recommend to try SNMP monitoring instead. It tends to have fewer bugs comparing to UPnP implementations. 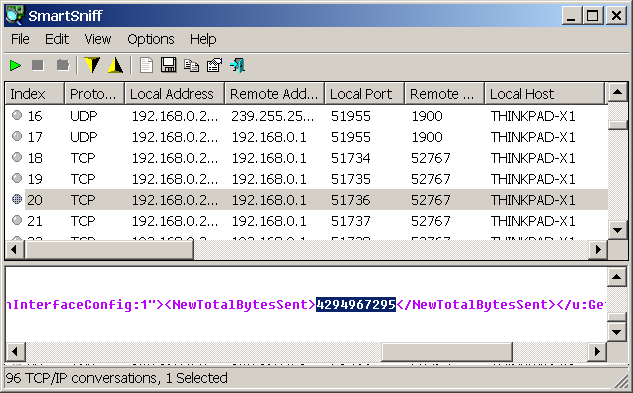 I'm a bit snowed under at the moment so I'll get back on this problem on the long weekend in Australia. I'll also look into SmartSniff.